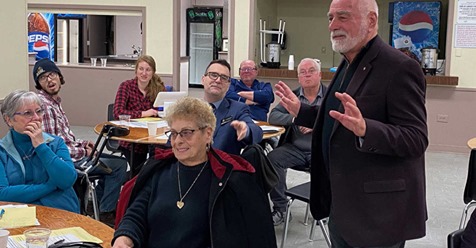 I felt compelled to respond to Mr. Morrison and Mr. Kuhn’s attacks on environmentalists at the Lake Cowichan Chamber of Commerce AGM. I hope these two gentlemen would agree that increasing pressures on our watersheds have impacted the Cowichan and Koksilah Rivers and Cowichan Lake.

The necessity to build a new weir to the tune of millions of dollars is a stark reminder that we need to rethink the way we plan and implement any action that increases the burden on our watersheds, lakes and rivers.

How can we advocate a “business as usual” policy and expect a different result? How can we promote the kinds of development that increase demands on watersheds and not expect a crisis?

Environmentalism is not a hobby or a secret society. It is a way of thinking and acting that is truly sustainable.

As for being “an enemy within” and “semi-secret quasi political organizations” as Mr. Morrison called environmentalists, I will remind him that all societal changes begin at a grass roots level and then move to the political institutions where they become codified and protected.

I find it helpful to think of this issue in this way: If in our own households we wasted the food we bought, didn’t make repairs, destroyed our furniture, didn’t save for a rainy day or didn’t keep things clean, we’d be sick and broke.

You can’t replace a watershed, buy a new river or order a fish and wildlife habitat from Amazon. If we don’t tread more lightly on this planet, we’ll be more than just sick and broke; we’ll be homeless.

CVRD Director Ian Morrison said quasi-political groups are killing projects through delay and red tape. (Warren Goulding/Gazette)
“They’re not out to save the world, they’re out to kick business.”